An Evening with Renée Fleming

The Mobile Symphony’s 2018-19 season features the best of classical music. Our gala opening concert with Renée Fleming will be the must-see event of the Gulf Coast’s arts season. Ms. Fleming is a rare star who crosses all barriers to draw fans of classical and pop music. Known as the “people’s diva,” she is one of the most beloved and acclaimed sopranos of all time. Her captivating concerts range from classical arias to songs from the American musical theater. She is the first classical star to perform in the world’s greatest concert halls AND sing the National Anthem at the Super Bowl.

One of the most beloved and celebrated singers of our time, soprano Renée Fleming captivates audiences with her sumptuous voice, consummate artistry, and compelling stage presence. At a White House ceremony in 2013, President Obama awarded her the National Medal of Arts, America’s highest honor for an individual artist.

Winner of the 2013 Grammy Award for Best Classical Vocal Solo, she brought her voice to a vast new audience in 2014, as the first classical artist ever to sing “The Star-Spangled Banner” at the Super Bowl. As a musical statesman, Renée has been sought after on numerous distinguished occasions, from the 2006 Nobel Peace Prize ceremony to performances in Beijing during the 2008 Olympic Games. In 2014, she sang in the televised concert at the Brandenburg Gate to commemorate the 25th anniversary of the fall of the Berlin Wall. In 2012, in an historic first, she sang on the balcony of Buckingham Palace in the Diamond Jubilee Concert for HM Queen Elizabeth II.

Renée Fleming is a champion of new music and has performed works by a wide range of contemporary composers, including recent compositions by André Previn, Caroline Shaw, Kevin Puts, Anders Hillborg, Henri Dutilleux, Brad Mehldau, and Wayne Shorter. Among her numerous awards are Germany’s Cross of the Order of Merit (2015); the Fulbright Lifetime Achievement Medal (2011); Sweden’s Polar Prize (2008); the Chevalier de la Légion d’Honneur from the French government (2005); Honorary Membership in the Royal Academy of Music (2003); and honorary doctorates from Harvard University, the University of Pennsylvania, Duke University (2015), Carnegie Mellon University (2012), the Eastman School of Music (2011) and The Juilliard School (2003), where she was also commencement speaker.

To view all of next season’s events, click here. 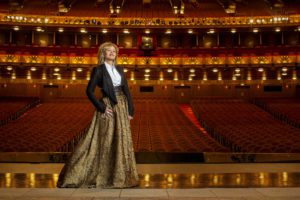