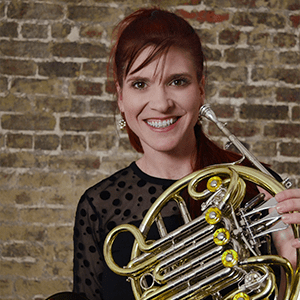 Jacquelyn Adams is one of the most exciting performers on the horn today. “She not only has a career that covers the regular time-honored horn player pursuits – orchestra playing, university teaching, and freelancing – but she has other creative visions and abilities that are rare by themselves and practically unheard of in a professional horn player” (The Horn Call, International Horn Society).

Jacquelyn Adams is third horn with the Mobile Symphony and principal horn with the Pensacola Symphony Orchestra, Meridian Symphony Orchestra, and The Gulf Coast Symphony Orchestra. Adams has performed as a soloist at Canada’s Sixth International Horn Day, The Cusco Music Festival, and with The Mobile Symphony Youth Orchestra; she has also premiered multiple works for solo horn. A founding member of the all-female pop horn quartet Genghis Barbie, recordings include Genghis Barbie’s self-titled debut album, David Byrne and St. Vincent’s Love This Giant, Astor Piazzolla’s Oblivion, and Aaron Copland’s Clarinet Concerto with grammy-nominated ensemble A Far Cry; she also records for NFL Films. Television and movie appearances include CBS’s The Early Show, Disney’s Step Up 3D, and BET’s Music Awards 2007. Adams is Assistant Professor of Horn at The University of Southern Mississippi and holds degrees from The Curtis Institute of Music, Yale University, and University of New York at Stony Brook.