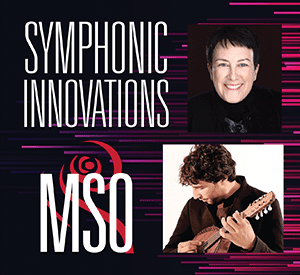 “You might remember the piece Blue Cathedral by Jennifer Higdon, a moving tribute to her brother that seems to touch the heavens. This piece made Jennifer famous throughout the world, and now she is one of the top two or three most-played living composers. We co-commissioned her Mandolin Concerto, together with the Munich Philharmonic and Chicago Philharmonic, and now we are thrilled to perform it for you. In addition to welcoming Avi Avital, the first classical mandolinist ever nominated for a Grammy, we are delighted that Jennifer herself will be on hand to introduce the piece for you!”

“When I first received this commission, I was inspired by the artistry of Avi Avital. His playing, while certainly virtuosic, is also soulful. He makes this unusual instrument come alive for audiences and lets them experience new sounds.  … Then the world turned upside down.  Many of my composer colleagues began to write dark and angry works as their response to COVID, the pandemic and the loss of so much in the world of classical music. To help process my own feelings, I decided to use this project to reaffirm my belief in humankind and to express my belief, musically, that the world will right itself and come out stronger for it.”

MSO’s Symphonic Innovations Fund, for which this concert is named, allowed  us to commission (along with Munich Philharmonic and Chicago Philharmonic) a new Mandolin Concerto by celebrated composer Jennifer Higdon and performed by mandolin player Avi Avital. We also include an earlier innovative work – Dvorak’s New World Symphony.

An American composer of contemporary classical music, Jennifer Higdon is one of the world’s top living composers. She received the 2010 Pulitzer Prize for her violin concerto and three Grammy Awards for Best Contemporary Classical Composition in 2010, 2018 and 2020. Avi Avital, a celebrated Israeli mandolinist, is the first mandolin soloist to be nominated for a classical Grammy.

As Higdon was writing the concerto, COVID hit and altered life and music across the globe. “To help process my own feelings,” Higdon said. “I decided to use this project to reaffirm my belief in humankind and to express my belief, musically, that the world will right itself and come out stronger for it.”

Antonin Dvořák’s New World Symphony was a major symphonic innovation when it premiered in 1893 in New York. Already a celebrated composer in Europe, Dvorak was hired to run the National Conservatory of Music in New York to help American composers find their own voices and shake off the European sound. His Symphony No. 9, subtitled “From the New World,” has become one of the world’s most beloved orchestral works. It also produced a melody that is a hymn and an anthem to what American music can be, incorporating all of America, from Native American to African American influences.

The concert opens with Joan Tower’s Fanfare for the Uncommon Woman. The piece references Aaron Copland’s iconic Fanfare for the Common Man and is a recognition of women’s contributions to classical music. Tower says that the piece was written for “women who take risks and are adventurous.”