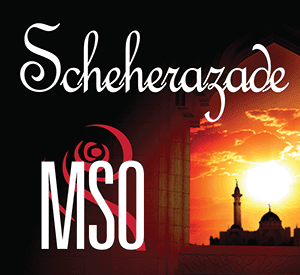 SEASON OPENER – Scheherazade
Saturday, September 24, 7:30 p.m.
Sunday, September 25, 2:30 p.m.
Saenger Theatre
Scott Speck, Conductor
Jenny Grégoire, violin
Louis Moreau Gottschalk: Symphony 1 “Night in the Tropics”
Nikolai Rimsky-Korsakov: Capriccio Espagnol
Nikolai Rimsky-Korsakov: Scheherazade
Jenny Gregoire, violin
We open our season with an all-time favorite – Scheherazade, featuring our concertmaster, Jenny Grégoire. The concert includes Capriccio Espagnol, another Rimsky-Korsakov favorite. These two amazing works are convincing proof of why Rimsky-Korsakov is considered a master of orchestration.
As a special treat, we perform New Orleans-born composer Louis Gottschalk’s Night in the Tropics. Gottschalk (1829-1869) was the first American pianist to achieve international recognition and the first American composer to utilize Latin American and Creole folk themes and rhythms. As a child in New Orleans, he was quickly recognized as a musical prodigy and was often called the Chopin of the Creoles. Like much of his work, Night in the Tropics, combines European-style music with Cuban, Creole and popular melodies and rhythms of the Americas, expressing much vitality and eclectic, multi-cultural energy.
Guest Artist
Jenny Grégoire
Violinist Jenny Grégoire has been concertmaster and an essential part of the Mobile Symphony Orchestra since 2001. This season she gives voice to Scheherazade, the exotic storyteller in the the collection of tales known as the One Thousand and One Nights, set to music by Nikolai Rimsky-Korsakov. Jenny last appeared as soloist with the orchestra in 2016, performing Vaughan Williams’ The Lark Ascending.
Jenny is also Associate Professor of Violin and String Area Coordinator at the University of Alabama. Born in Québec, Canada, she began to play violin when she was five. At age six, she was admitted in the pre-college division of the Québec Music Conservatoire and earned both undergraduate and graduate degrees in violin performance, with a minor in chamber music. Upon leaving Québec, she attended Northwestern University, where she received a master’s degree in Violin Performance and Pedagogy. She was  a member of the Civic Orchestra of Chicago for two seasons and worked with conductors Daniel Barenboim, Neeme Jarvi, Mstislav Rostropovich, Pierre Boulez and Cliff Colnot, among others. Jenny Grégoire left Chicago to play one season with the New World Symphony, under the direction of Michael Tilson Thomas, in Miami, Fla.
She is extremely sought-after in the southeast, as she is also concertmaster of the Meridian, North Mississippi and Tuscaloosa symphony orchestras.
In addition to her orchestral career, Jenny remains active as a soloist and recitalist. She has performed several times as a soloist with the Mobile Symphony and the Meridian Symphony. In May 2019, she performed the Tchaikovsky Violin Concerto with the Tuscaloosa Symphony Orchestra. She has been heard in solo and chamber music recitals throughout the United States and Canada. An avid chamber musician, she has notably collaborated with violinists Stefan Jackiw and Nadja Salerno-Sonnenberg, as well as pianist William Wolfram. Additionally, Jenny is on faculty at the Eastern Music Festival, where she is the Assistant Principal Second Violin in the faculty orchestra, under the direction of Maestro Gerard Schwarz. She recently performed Mozart Violin Concerto No. 4 with the Eastern Music Festival Chamber Orchestra.
In 2019, Jenny Grégoire traveled to Brazil with pianist Dr. Robert Holm, to perform recitals and teach masterclasses at the Conservatório de Tatuí and Unicamp University in Campinas.
Buy Tickets
+ Google Calendar+ Add to iCalendar