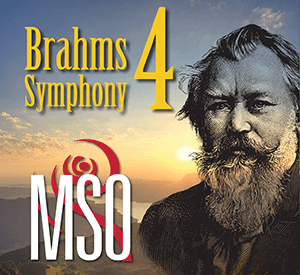 This concert is off to a vigorous start with Carl Maria von Weber’s brilliant and powerful overture to Euryanthe. Then the University of South Alabama Concert Choir and Mobile Opera Chorus join us for two very different choral works: Caroline Shaw’s Music in Common Time and Mozart’s Ave Verum.

Caroline Shaw is the youngest recipient of the Pulitzer Prize in Music for Partita for 8 Voices (Roomful of Teeth), and she works often in collaboration with others, as producer, composer, violinist and vocalist. She won the 2022 Grammy Award for Best Contemporary Classical Composition for her Narrow Sea. We contrast the vibrant modern sounds of Shaw’s Common Time with the full lush harmonies of Mozart’s Ave Verum.

The concert comes to an invigorating conclusion with Brahms’ monumental fourth symphony.

Alabama-born conductor Norman Huynh continues to build a reputation as one of classical music’s most adventurous ambassadors.

Hailed for the exuberance with which he leads orchestras across Europe, Asia and North America, Huynh’s ability to attract new audiences to the orchestra has received equal renown. The 2020 season inaugurated his tenure as Music Director of the Bozeman Symphony Orchestra, joining an existing appointment as Associate Conductor for the Oregon Symphony.

Huynh has attained international prominence in the first years of his career, most recently through an invitation to the Bruno Walter Young Conductor Preview, a selective showcase hosted by the League of American Orchestras. He was also selected as one of twenty-four finalist out of more than 600 applicants for the 2021 Malko Conducting Competition. He maintains an active guest conducting schedule, with recent engagements including the Detroit Symphony Orchestra, St. Louis Symphony Orchestra, Rochester Symphony Orchestra, Orchestra Sinfónica del Vallés (Spain) and the Princess Galyani Vadhana Youth Orchestra of Thailand. In addition, Norman has worked with both the New York Philharmonic and for John Williams of the Los Angeles Philharmonic as a cover conductor.

All Events
« Musical Romance
Lords of the Ring »