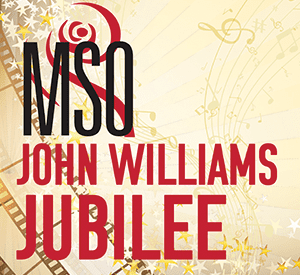 “It’s finally here! We had planned a spectacular concert of our favorite movie scores last season, but since it called for an enormous orchestra, it was one of the unfortunate casualties of the quarantine. Now we are thrilled to pay tribute to the unbelievably versatile John Williams, the 52-time Oscar nominee (you read that right!), who will have his 90th birthday shortly before this concert. I’ve been a huge admirer since my teens; it was he who first sparked my own interest in composition. In the words of Steven Spielberg: “Without John Williams, bikes don’t really fly, nor do brooms in Quidditch matches, nor do men in red capes. There is no Force, dinosaurs do not walk the Earth, we do not wonder, we do not weep, we do not believe.”  – Scott Speck, Music Director

This thrilling concert combines some of the best works of America’s favorite composer, John Williams. Music from Harry Potter, Raiders of the Lost Ark, Star Wars, E.T. and more. Performed in memory of Allan Rowe and Paul Low.

Adventures on Earth from E.T.

All Concerts are subject to change.