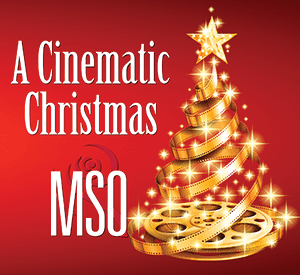 Scott Speck, conductor
Holly Paine, vocalist
Have yourself a merry little Christmas with the Mobile Symphony. Our annual holiday concert is a Christmas tradition for families all across the Gulf Coast. This year we’re featuring music from your favorite holiday movies! Don’t miss the Gulf Coast’s best Christmas concert!
White Christmas
Silver Bells
Have Yourself a Merry Little Christmas
March of the Toys
Somewhere in My Memory
Rudolph the Red-Nosed Reindeer
Polar Express
… and many more
A Message from Scott Speck: A Cinematic Christmas has an Alabama Connection
Three of the songs you’ll hear in our Cinematic Christmas concert are by an Alabama native – and a thoroughly fascinating one at that. The celebrated composer and lyricist Hugh Martin took his Alabama talent and conquered the musical world.
Hugh Martin was born in Birmingham in 1914. After studying at the Birmingham Conservatory of Music and Phillips High School, young Hugh went on to college at Birmingham Southern. There he became so inspired by the innovative Broadway music of George Gershwin that he decided to devote himself to songwriting. From there it was off to New York – and a star was born.
None of Hugh Martin’s songs are more celebrated than the three you’ll hear in this concert. That may be because they were made famous by Judy Garland (who later became a regular collaborator and one of his best friends), in the film Meet Me in St. Louis. Of the three songs from that movie, “Have Yourself a Merry Little Christmas” is by far the most performed, having been taken up by artists from Frank Sinatra, Tony Bennett, Ella Fitzgerald, Doris Day and Bing Crosby to Christina Aguilera, Garth Brooks, Ella Fitzgerald, Whitney Houston, Barry Manilow, Bette Midler and Lou Rawls, and even the rock bands Coldplay, Twisted Sister and The Jackson Five!
Artist Spotlight: Holly Payne, vocalist
Holly Payne makes her Mobile Symphony with A Cinematic Christmas, reprising several songs she won praise for as Esther Smith in a recent production of Meet Me in St. Louis. Other recent credits include Gilbert, Arizona’s Hale Theatre’s A Christmas Carol, Hale’s The Addam’s Family, Hale’s No No Nanette and her favorite role of all Peter Pan. Holly was awarded Best Actress at the 2016 ASU Gammage Awards and attended the Jimmy Awards at NYU, performing on Broadway at the Minskoff Theatre.
In Meet Me in St. Louis, Holly played Esther, one of the Smith family’s four sisters in this romantic comedy. She, of course, falls head over heels for the boy next door, while singing some iconic American songs made popular by Judy Garland in the movie – including “Have Yourself a Merry Little Christmas.”
Playing a role so strongly associated with Garland can’t be easy, but Holly received a glowing review from Talking Broadway: “With a voice that is incredibly pure, strong and simply beautiful, Holly Payne is a knock out. The memory of Judy Garland’s film portrayal may still be very clear to many audience members but Payne doesn’t attempt to copy Garland’s style in either her singing or acting. Instead, with perfect character choices and a voice that is warm, clear and crisp, she makes the role indelibly her own.”
Holly says she learned something about the famous Christmas carol while doing the role. “Now I hear that song a little differently. It’s more beautiful, has more meaning, because Esther is using the words to try and comfort her sister …  and herself. She’s assuring them both that as long as they are together, they can be happy anywhere.”