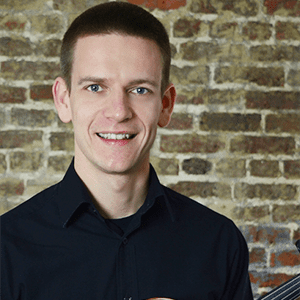 Razvan, originally from Romania, started playing violin at the age of 6, being fascinated by the sound of the violin after his brother started playing. After playing violin for 8 years, he was drawn by the beautiful deep sounds of the viola, and has remained in love with it ever since. He has been making beautiful music with the Mobile Symphony since 2014, and enjoys collaborating with Pensacola Symphony, Louisiana Philharmonic, and Toledo Symphony.

Razvan completed his bachelor and master’s degrees at Bowling Green State University, and his doctorate at Florida State University. He had the opportunity to study with such distinguished pedagogues as Csaba Erdelyi, Dr. Meghan Yanik, Matthew Daline and Dr. Pamela Ryan. He has performed with Dearborn Symphony, Ann Arbor Symphony, Jackson Symphony, National Repertory Orchestra, Sinfonia Gulf Coast, and Lima Symphony. Razvan had the opportunity to perform at Carnegie Hall with Toledo Symphony, Suntory Hall in Japan, as well as other venues around the world, including extensive tours in China, Japan, Spain, France, Germany, Greece, England, and Romania.

While not practicing or performing, Razvan loves enjoying time in nature, traveling, and cooking.