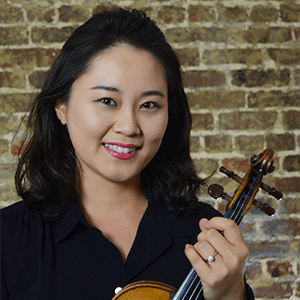 Jiwon Hwang has been a violinist with the Mobile Symphony Orchestra since 2010. Born and raised in Seoul, South Korea, Ms. Hwang began to play the piano at 4 but moved her interest to the violin at the age of 14 because of the pretty violin cases. Ms. Hwang received her Bachelor of Music and Master of Music at Sookmyung Women’s University. As a college student, Ms. Jiwon toured many countries performing solo recitals and attending chamber music festivals. In 2008, she came to the United States to continue her professional studies at Florida State University, where she studied with Professor Eliot Chapo and earned her Doctor of Music in 2013. Jiwon held her debut recital entitled ‘Russia in New York’ at Carnegie Hall in New York in 2014. Currently, Ms. Hwang also plays with Pensacola Symphony Orchestra and Sinfonia Gulf Coast.

Ms. Hwang has a small greedy puppy, Mirr and a fat cat, Chocho. They fight a lot everyday, so she plays evenly for each. As an avid food lover, she also enjoys cooking and baking.