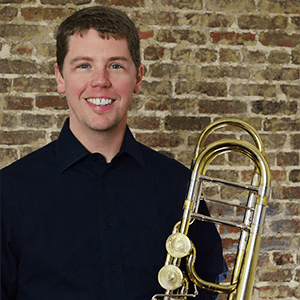 Jeff Koonce began his musical journey as a seven-year old when he started playing the piano. By middle school, music had taken hold and there was no question Jeff would be in the band. What instrument he would play, however, was the question. Having heard a trumpet player play a beautiful solo of “Amazing Grace”, Jeff decided he must play trumpet. At instrument try-outs, the trumpet did not comply. So, Jeff was then handed a trombone and after a few notes the band director declared, “You are playing the trombone.” The discovery of orchestral music shortly thereafter spurred Jeff toward life as an orchestral musician. He joined the Mobile Symphony as bass trombonist in 2008 and holds that same position in the Tuscaloosa Symphony. Jeff also frequently performs with the Alabama Symphony Orchestra and the Huntsville Symphony. Jeff holds a Bachelor of Music degree from the Peabody Conservatory-Johns Hopkins University. There he studied with Randall Campora, bass trombone, and David Fedderly, tuba (retired), both of the Baltimore Symphony.

Outside of orchestral life, Jeff is the Chief Musician at Red Mountain Church (PCA) in Birmingham, where he enjoys writing and recording new music for old, mostly forgotten, hymn texts.